They may go by many names, but they are those who are to lead their country to prosperity, safety, and advancement.

Who keeps presidents accountable when they go awry or violate rights or go against the benefit of their own people?

Be informed about the un-presidential behavior of our heads of state throughout the world and stand in solidarity with the citizens who desire to see change.

There are recent reports of the Moon administration silencing human rights activists in order to placate North Korea and China.

The Moon administration has been working hard to maintain friendly relations with both countries for the sake of economic gain.

The Moon administration enacted strict contact tracing, broadcasting citizens’ information and violating right to privacy. There are also reports of minority groups being penalized by the government when their members become sick with COVID-19.

Although he said that he would be a “president for women”, the reality of South Korea’s protection of women against sexual harassment is that there is none. Since his election, members of his cabinet have been involved in poor presidential behavior, sexual harassment and bribery investigations.

Although he said that he would be a “president for women”, the reality of South Korea’s protection of women against sexual harassment is that there is none. The mayor of Seoul, the country’s capital, recently died after being embroiled in sexual harassment cases.

A Brief History of North and South Korea

Why are the two nations apart?

North and South Korea, once part of the Korean peninsula as a single nation, has been two separate, divided nations since the end of World War II in 1945.

The two have been in conflict with one another since then and fought in the Korean War from 1950-1953. The Korean War ended in armistice, but a peace treaty was not achieved and the two nations are technically still in war against one another.

North Korea, officially called the Democratic People’s Republic of Korea, is an authoritarian regime with a long history of human rights abuses, poor presidential behavior, extreme poverty and deprivation, and strong state censorship for the majority of citizens.

South Korea is officially called the Republic of South Korea. 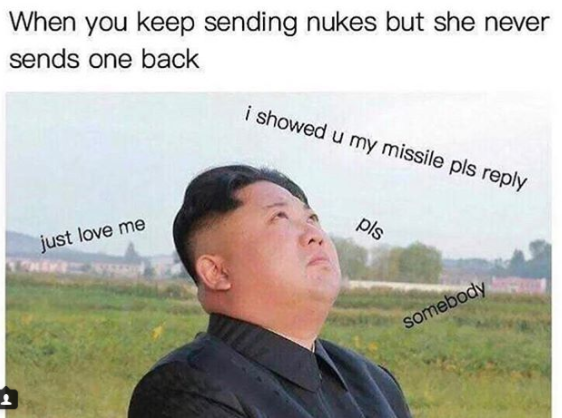 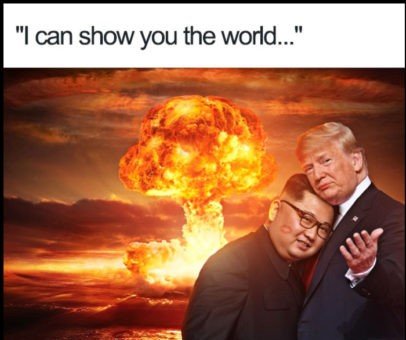 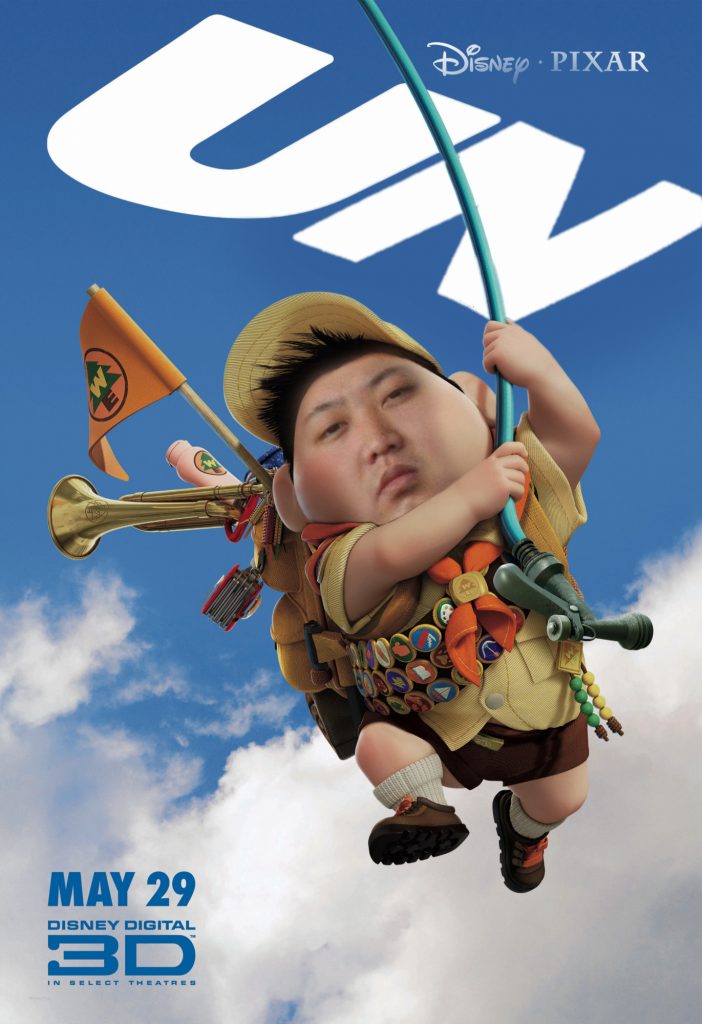 RECENT NEWS ON MOON JAE IN 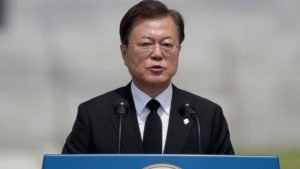 But now he’s facing a slew of allegations for his presidential behavior that could potentially threaten his own presidency.

Kim Kyung-soo, the public relations manager of Moon’s presidential campaign, was sentenced late last month to two and a half years in prison for using an influential blogger to manipulate public opinion on social media. Kim … allowed the blogger to use a computer program that created fake “likes” and post comments favorable to Moon on some 70,000 news stories. 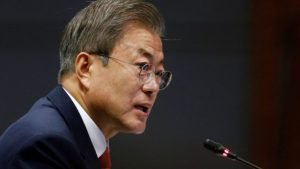 SEOUL (AFP) – South Korean President Moon Jae-in, who promised to be a “feminist leader” during his election campaign, was under fire on Thursday for his poor presidential behavior of sending condolence flowers to the funeral of a convicted sex offender’s mother.

Former provincial governor Ahn … was convicted last year of sexual intercourse by abuse of authority after his female assistant accused him of repeatedly raping her. He is serving three and a half years in prison. 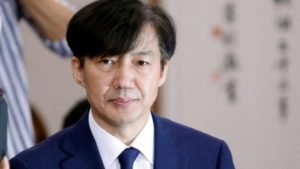 SEOUL (Reuters) – South Korean President Moon Jae-in’s nominee for justice minister is under a prosecution enquiry and public outcry over a scandal that has reignited debate over class privilege and presidential behavior.

Moon promised change. “Opportunities will be equal, processes will be fair, and results will be just,” he said.

Cho was seen as a vocal champion of progressive causes who had spoken out against elitism. “Cho should listen to those disappointed by his hypocritical naked face” says a college student who once was supportive of Cho as a candidate. 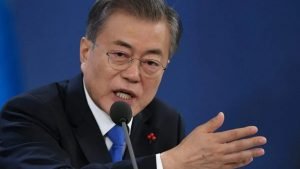 … South Korea’s slowing economy has emerged as a political liability for Moon, even as he’s enjoyed the global spotlight from playing peacemaker between US President Donald Trump and North Korean leader Kim Jong-un. The self-styled “jobs president” has seen his once-sky-high poll numbers tumble..

Moon, a progressive, was swept into office in 2017 promising a reversal from the conglomerate-focused economic agenda of ousted President Park Geun-hye.

But his plan to raise the minimum wage 11 per cent disappointed both workers who didn’t think it was enough and businesses who said it stifled growth. More than three-quarters of the 30 experts surveyed predicted that employment growth would slow. 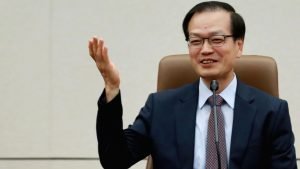 But the alleged involvement of Kim Kyoung-soo, one of Mr. Moon’s closest aides, is a political setback for Mr. Moon, who has vowed to set himself apart from South Korea’s former presidents and their ethical scandals.

The Druking investigation followed another opinion-rigging scandal, in which South Korea’s government intelligence agency was accused of running a clandestine online operation to help the 2012 Park campaign win the election for Presidency. 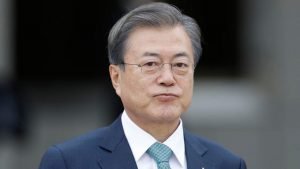 After his predecessor Park Geun-hye was toppled in an extraordinary corruption scandal involving a confidante linked to a shamanistic cult, Moon seemed to embody a fairer and more just South Korea.

Although Moon won the youth vote in May 2017, young South Korean men are now abandoning the president in droves and are less satisfied with his performance than any other demographic. His approval rating with young men is at an all time low.

In a survey carried out by South Korean polling firm Realmeter last month, just 29.4 percent of men in their 20s said they approved of Moon and his presidential behavior, compared to 64.5 per cent of women in the same age bracket… 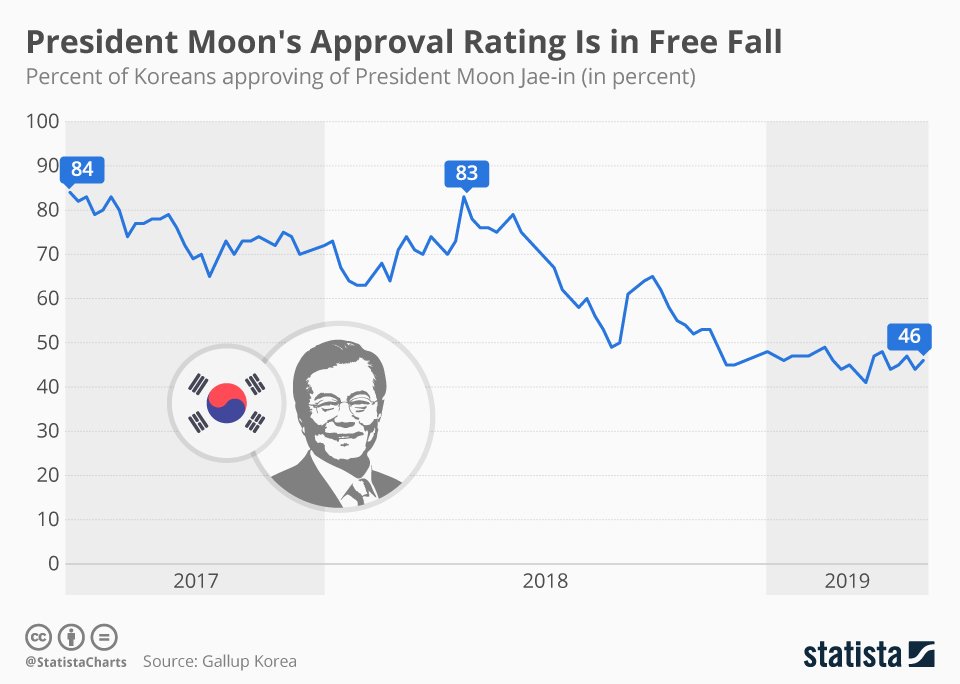 Petitions Against Moon Jae-in for related to his presidential behavior

What are the most pressing issues and sufferings of the South Korean people?

Continuing the Legacy of Oppression & Dictatorship

Kim’s official title is the Chairman of the States Affairs Commission and head of the ruling Workers’ Party of Korea.

He is better known by the people of North Korea as “Supreme Leader”.

His rule comes inherited from his father, Kim Jong-Il, and his grandfather, Kim Il-Sung, who founded and the first supreme leader of North Korea.

Ruling by Cult of Personality

Like the previous Supreme Leaders before him, Kim has ruled by a strong cult of personality, mimicking the style and approach of his grandfather, Kim Il-Sung to further cement his legitimacy and authority as ruler.

Political opponents and those who have gone against him, or have brought his regime undesirable results have been executed.

Despite the rosy image of a prosperous and happy country that North Korea tries to push out through its propaganda, the reality is far worse. There are reports of widespread poverty, starvation, disease, lack of access to basic supplies such as medical supplies, and electricity. There is strict surveillance of all citizens and a heavy cost for those who refuse to put on a smile for the international camera.

Love of Rockets, Basketball and Trump

Although there is heavy propaganda against the U.S. and South Korea, portraying them as the cause of North Korea’s issues and struggles, Kim has expressed a keen interest in Western culture and pleasures.

He is widely known for his love for basketball (see: Dennis Rodman’s visit to North Korea) and has surprised the world by engaging in summits with Trump and Moon.

North Korea: Executed 60 people in the past year alone

CONCERNS ABOUT CHINA
AND THE COMMUNIST PARTY

Xi Jinping:
Echoes of Mao with a friendly face

Who is Vladmir Putin? From Ex-Spy to President

Putin has been the effective ruler and dictator of Russia since 1999. During his decades of rule have come numerous reports of human rights violations and activities that go against international treaties and laws.

A State of Secrecy and Propaganda

Putin has heavily cracked down on media and press that are critical of his regime, and has enforced strict punishments on protesters, whether peaceful or not.

The government is also accused of engaging in deceptive propaganda, not only domestically but internationally to interfere with other states’ elections and media such as the United States presidential elections.

Heads of State of Concern

The Reign of the Sisi Regime

Petition against Attack on Indigenous Rights

No to Putin's Entrance into the Human Rights Council 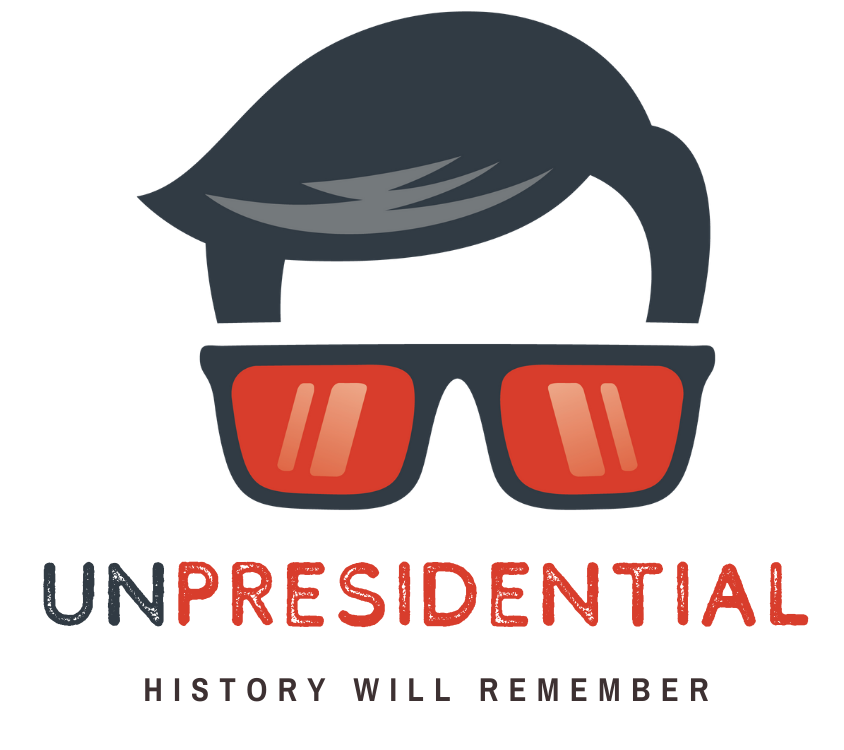